It’s All About Understanding the Formula for English 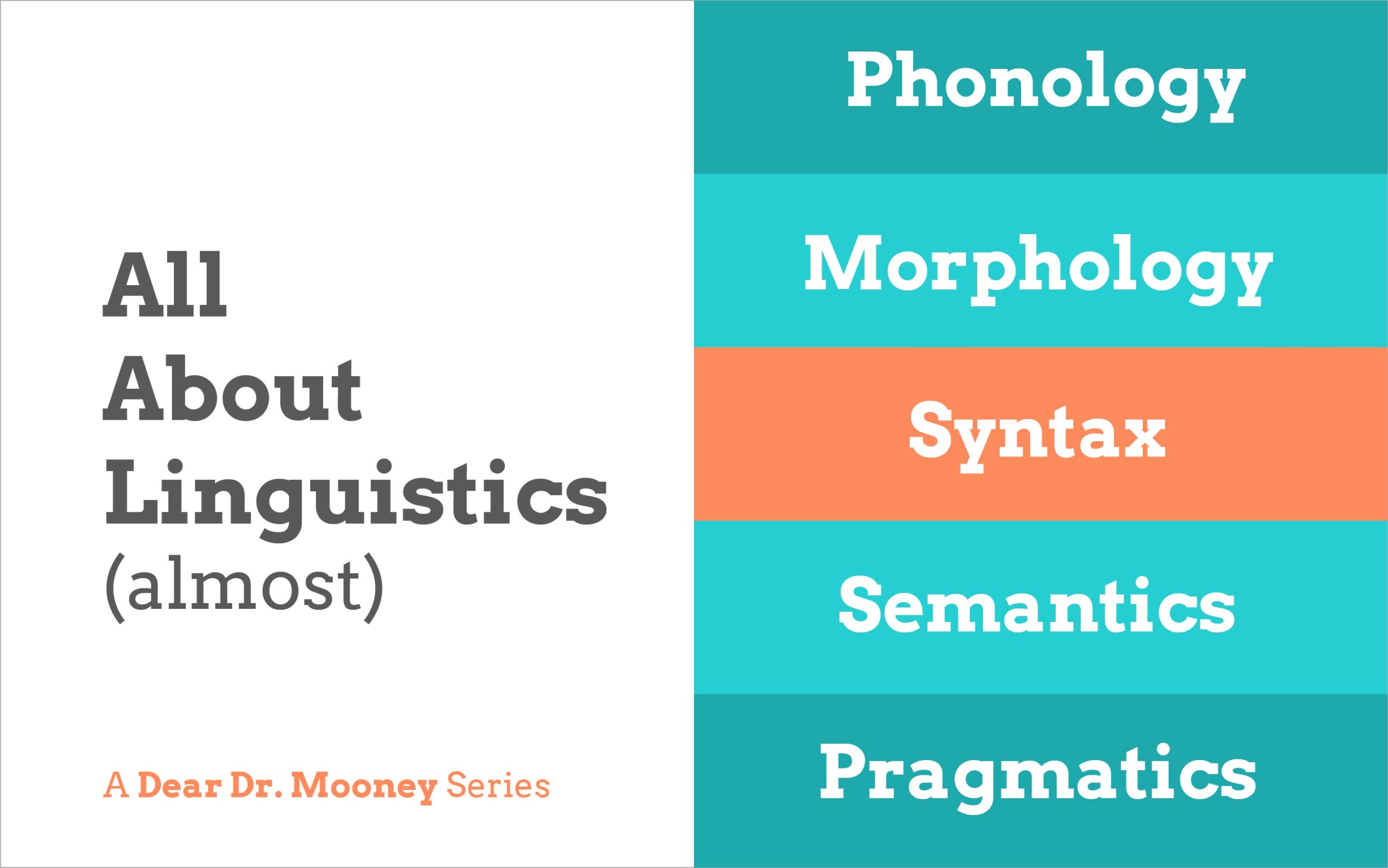 Academic language is difficult for many ELs. It’s hard to argue with that statement. Often, syntax – not just vocabulary – makes it problematic. This week, I offer some key insights to help you better understand the syntax of English.

Syntax is the study of phrase and sentence construction in a language. Even if we know how to pronounce the sounds of a language and create words correctly, it doesn’t mean much if we don’t know how to put all of those items together to convey our ideas. The importance of word order in phrases, clauses, and sentences varies by language. Some languages, like Russian, have a flexible word order, while others, like English, do not!

All arrangements of S, V, O occur somewhere in the world’s languages, and some even use one or more constructions interchangeably. This works when a language uses morphology to indicate meaning. For instance, some languages add a prefix or suffix to the verb to denote who the subject is. This means that the verb doesn’t have to be placed in a certain place in the sentence in order to make sense.

Word order in a language goes even deeper than the surface level subject, verb, object. Each of these parts of the sentence are composed of smaller parts. For example, a verb is needed if you’re constructing a verb phrase. But, do you know what else can be in that phrase?

In English, you could add a noun phrase, a prepositional phrase, or an adverbial phrase. You can add one, two or all three of these. It’s up to you and how descriptive you want your verb phrase to be.

The phrase components can be written in a type of formula:

The formula reads – A verb phrase consists of a required verb. (With no parentheses around the abbreviation, it indicates the element is required.) A verb phrase can optionally include a noun phrase (NP), a prepositional phrase (PP), or an adverbial phrase (ADVP).

Here are a few other formulas for English phrases. They look a little bit like mathematical formulas, don’t they?

A sentence must have a noun phrase, an auxiliary, and a verb phrase. The auxiliary isn’t always visible in the sentence, but it’s there!

A noun phrase consists of an optional determiner, quantifier, adjective phrase, or prepositional phrase, but it must contain a noun.

Why does it matter in my classroom?

Syntax matters in your classroom because it may be the basis for some of your lessons. Are you teaching your ELs the parts of speech and expecting them to memorize them and diagram sentences? This isn’t bad if you know for sure that your students need this information.

Yes, they need to know how to form grammatically correct sentences. Do they have to know how to describe their grammatical nature? If you’re a native English speaker, could you have explained the formulas above before you read them? If not, then you just demonstrated that you can use English fluently without understanding its structure at a metacognitive level.

Yes. There are uses for knowing all of those parts of speech and being able to deconstruct sentences into detailed diagrams. But…do your students need to know that?

It’s helpful for you to understand English syntax because that knowledge may help you decipher where your students are struggling. Perhaps you notice that they have difficulty creating prepositional phrases or getting the verb-object order correct. You may also want to learn some basics of their native language’s syntax. This could help you determine whether their errors are negative transfer from the native language or an overgeneralization of the English rules they’re acquiring.

In addition to vocabulary, syntax is what makes academic language (CALP) so difficult. Passive sentences, nominalizations, and comparative and logical connectors are just a few of the ways that this occurs.

The passive voice is used a lot in academic writing to make it sound more authoritative. It does that, but it also makes it more difficult to comprehend.

Academic texts also contain nominalizations. This is when we turn verbs into nouns.

Comparatives and logical connectors are also part of the syntax of academic language.

You probably already provide sentence frames for your ELs’ writing projects. This is actually a fabulous way to support their acquisition of English syntax. By giving them a frame to use, you are supplying the syntax, or part of it, while they focus on the content knowledge they are learning. Just like the scaffolding on a building, you will slowly remove these frames as the students no longer need them. Perhaps your earlier sentence frames have many words and few blanks for them to complete. As they continue working with that type of sentence, you will slowly provide fewer words, but more blanks. They may or may not be able to explain a particular sentence construction, but once they’ve acquired it, they will be able to use it correctly.

Cloze passages are other ways for students to work on sentence construction without even realizing they’re doing so. Select a short passage from one of their texts and replace every fifth word with a blank. Allow them to work with a partner to try to recreate the paragraph by filling in the blanks. What you may notice is that even if they don’t supply the same words as the author, they will often use the correct part of speech. This demonstrates that they are understanding English syntax if they choose nouns to go in the noun blanks and verbs in the verb blanks, even if you never discussed those parts of speech. Continued exposure to these types of activities can lead students into deeper acquisition of English syntax.

For older, or more advanced ELs, you might try activities that involve more explicit discussion of syntax in academic writing. Provide students with short choppy sentences and have them work with a partner to try to combine two sentences into one. You can discuss the purpose of these combinations and point out how they make the writing/reading more smooth and efficient. Students can compare their newly constructed sentences with classmates and discuss which versions seem to be the most effective and why.

You can do this same idea with the paragraphs of an essay. Give the students a five-paragraph essay cut into five parts. They can work together to put the paragraphs back in the correct order. In discussing their decisions, you’ll be able to see if students used transition words or other syntactic structures or simply guessed! Eventually, you can move on to giving them the essay with each sentence separated. Working in a group, they will read and reread the sentences and discuss the order they should be in to construct a well-organized essay.

These activities allow students to examine English syntax deeply, but for the purpose of understanding and conveying meaning, not in order to diagram the sentences!

Next week:
It’s all semantics. What does that even mean??